The Inability to Commit 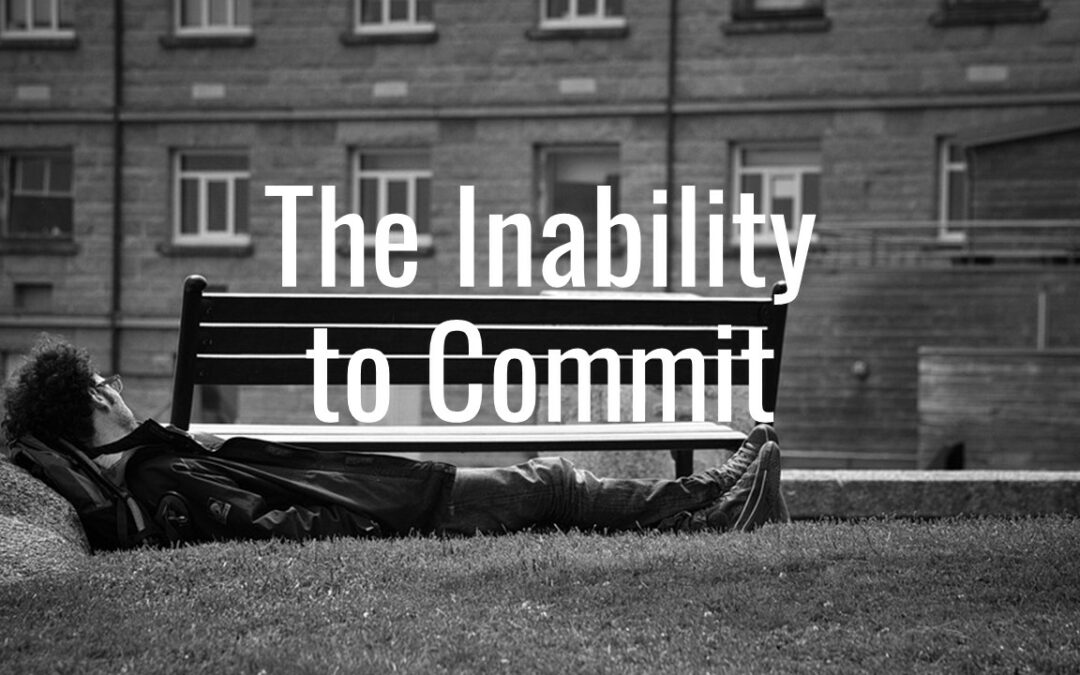 It seems today in our culture people are less interested in making a commitment to church, let alone to God. The Bible says without vision people will perish (Proverbs 29:18.) While the pandemic has played a role in the demise of commitment, the decline has been on the rise for years. Let us be honest, it has always been Satan’s desire to one, destroy the family unit, two, destroy marriages, and three, destroy God’s church.

I am more convinced in the last few years, in some regards the church as a whole, has some blame in this. But men are not stepping up to lead, destroying life as we know it. Many sought to water down God’s truth to make Christianity less offensive and more seeker friendly. And while the world and Satan has embraced this thought, it has only caused a watered-down faith that is five miles wide and a half inch deep.

Ultimately the church is now facing times like no other. People have always come, joined, and left the local church. However, in the 21 century, we regularly see men and women alike make excuses for non-commitment at an unprecedented level. Leaving the church community in a spiral. Many say today, times are different, and yes, they are. We are heading toward the days of Noah. Debauchery and complacency run rampent. God remains the same, He does not change His mind.

Men refuse to be the leader in the home and in the world, let alone the church. In one church after another, men refuse to pick up the mantle of leadership. Consider for a moment Joshua. He proclaimed:

However, today we see a society that wants a leadership position in title only. They refuse to have a voice to lead God’s people to His throne of grace and to lead their wives toward the Lord, to protect their wives and family with God’s truth. Satan has stolen many away to be forever lost!

Likewise, husbands, live with your wives in an understanding way, showing honor to the woman as the weaker vessel, since they are heirs with you of the grace of life, so that your prayers may not be hindered. – 1st Peter 3:7 (ESV)

In our modern society when a man speaks God’s truth and tries to lead, he is called old-fashioned, offensive, and even sexist. Sadly, most men have chosen to not have a voice in leadership at all.

The wicked flee when no one pursues, but the righteous are bold as a lion.– Proverbs 28:1(ESV)

Laziness is detestable in the sight of God.

Lazy hands make for poverty, but diligent hands bring wealth. And now Satan’s minions have taken a seat in the front row and mock the sermons designed to prevent people from going to hell.

Men, God has commanded you to lead and protect your family, your children, and his church.

Men like Joshua, Zerubbabel, and Nehemiah made a choice to stand for the truth of God and lead His people straight to Him despite the opposition from the world. It was men like these that rebuilt God’s country, encouraged His people, and rebuilt His house.

Men, it is up to us to lead others toward God’s truth and to not grow our waist size while sitting in the easy chair. Sadly, I have experienced that in most churches women have taken the role of leading in many ways and the men have stayed silent.

But I want you to understand that the head of every man is Christ, the head of a wife is her husband, and the head of Christ is God. – 1 Corinthians 11:3

While this seems okay, it is not honorable in God’s sight. God told Adam to protect Eve, but he failed to do so, and this led her to be deceived by that crafty serpent. I told my wife when we were dating that she made me stand taller. What I meant was taller as a man of God. Men, it is time to grow a backbone and lead your family toward the Lord. Moreover, it is past time to lead his church toward eternity.

It is a well-known fact that complacency will cause relapse. Complacency “laziness” will continue to destroy our homes and churches if we do not get out of the recliner, ask God for wisdom and guidance, and lead with fervor and passion!

So, because you are lukewarm, and neither hot nor cold, I will spit you out of my mouth. – Revelation 3:16

In the book of Romans, the apostle Paul said:

Not only that, but we rejoice in our sufferings, knowing that suffering produces endurance, and endurance produces character, and character produces hope, and hope does not put us to shame, because God’s love has been poured into our hearts through the Holy Spirit who has been given to us. – Romans 5:3-5

It is past time to Teach our families and our forever family, the church, to do the very same! Pick up the mantel of leadership and light the way into eternity and do so with integrity!